One proposal would be very simple.
It would be to enhance existing uvw map modifier by adding ability to apply uv
mapping not for a single mesh, but to each element of the mesh.
I know its possible to achieve same result by selecting each element in mesh edit or poly edit mode
detach these elements from single mesh, and as a result, to have lots of objects to which u can individually apply uvw map modifier.
but in some cases, when u have a complex mesh, which consists of lots of elements, that could be very time
consuming work. These complex meshes are often result of importing geometry from other 3d applications.
So the idea is to apply, say a spherical or box or whatever type of uv projection method to each separate mesh element without a need to divide mesh and detach parts of it.
Now if we have a complex model, say a tree, or dono, anything actually, and we are not planing to have perfect uv’s by pelt mapping or selecting separate polygons and applying separate planar maps to parts of a mesh, we would want to have some simple method to get uv coordinates fast, and semi accurate. in current situation we can simply apply uv map modifier to whole object,
and expect that box or cylindrical map projection will do fine. and in some cases it does.
say model is far away from camera, and we have no time to produce good uv coordinates. But imagine we would have some middle quality solution. that is something between creating precise uv maps for separate polygon selections, or having to use pelt mapping, and between simply applying say cylindrical projection
to a whole mesh.
I propose to have an ability in a uvw map modifier to have a “per element” button which would apply
selected map projection method not to whole object but to each separate mesh element.
and also we would have an ability to manipulate (scale, rotate, move) uv projections within a single interface for each single element in one mesh,
at the same time without a need to apply hundreds, or be it tens of mesh select modifiers, and uv map modifiers, and struggling and getting lost in huge modifier stack.
lets look at the images below. 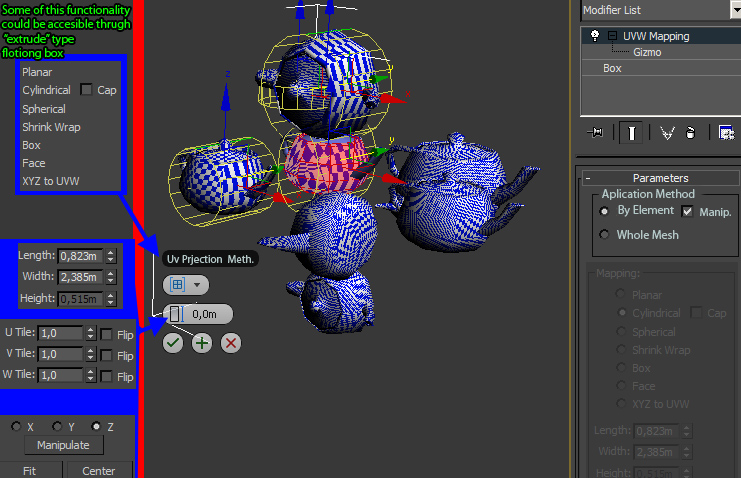 4. same, but with floating toolbox for selecting each element and having ability to apply different (cylindrical, box, etc.) projection modes.
Some additional thoughts.
Why do we think only about elements of mesh, can we use mat id’s for same porpoise? can we
apply separate uvw projection methods for mat id’s also? That could come in hand too..?

Next question would be, can we use both mat ID’s and Mesh elements? Or is there an easy and fast (one button solution) way to convert separate mesh elements to mat ID’s. Or can we easily convert Mat ID’s to mesh elements? And if we where to write such tool, where would we place it?
Should it be a part of edit poly modifier? edit mesh? or uvw modifier?
Any ideas?

One thought on “Proposal for uvw map modifier”